Determining Discrete Data Points from the Sex and Gender Spectra

Sex and gender play an important role in health and disease, yet data collection methods for these demographics are outdated, insufficient, or non-existent. The recent interest in sex disaggregated data due to COVID-19 should be harnessed to reinvent the way we value, collect, and employ sex and gender data.

Sex (biological construct) and gender (social construct) are not fixed binary options, but more of a spectrum that can be fluid throughout a person’s life. Disappointingly, even when utilizing the obsolete view of sex and gender as binary (male v. female) there exists insufficient disaggregated public health data. The ability to analyze data through the lenses of sex and gender is critical to understanding the dynamics of disease and the human response to interventions. Here we will focus on the infrastructure and availability of data disaggregated by sex and gender, but for further discussion of the intersectionality of sex and gender data, please read our recent Q&A with Dr. Sabra Klein.

The Current State of Sex and Gender Data

As we have noted, in the absence of standards, there are significant limitations on how we can interpret and analyze COVID data. In fact, in the United States, there is no requirement or standard for country-level public health data to be disaggregated by either sex or gender, despite calls to modernize these practices.1 Since it is not mandatory, country-level public health data from the CDC will not have that demographic breakdown. Other countries, including New Zealand,2 require country-level surveillance data as well as clinical data to be broken down and analyzed through what they call a gender lens. 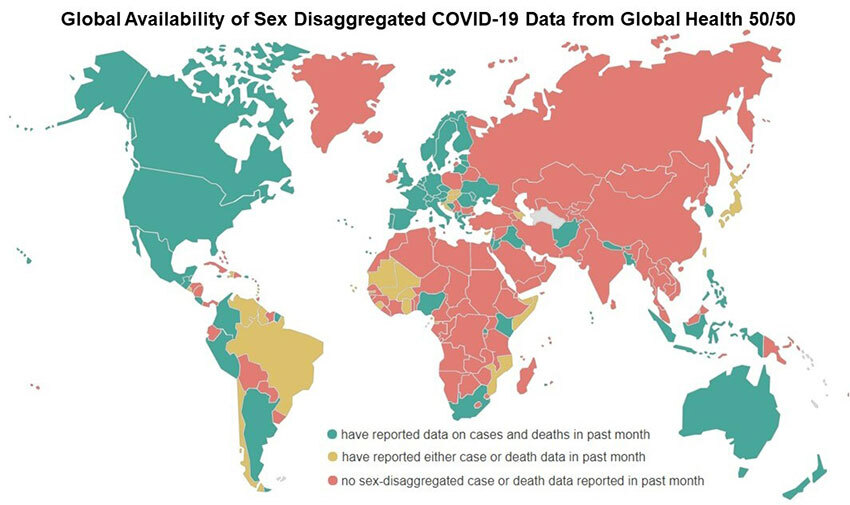 When it comes to academic research, as much as we want to think that we're thought leaders on this topic, we too are hindered by biases associated with historical norms in the collection of sex/gender data. Few researchers ask if the pathways that are getting activated or the drugs they are testing function as well and to the same degree in males and females. The National Institutes of Health has mandated that all NIH-funded research must consider sex where relevant,3 but few researchers investigate sex as an independent, influential variable.

Even in hospitals, metadata on sex and gender is either unreliable or inconsistent due to antiquated naming conventions and incompatible electronic health records (EHRs). For example, the establishment of the unified JH-CROWN database from all hospitals in the Johns Hopkins Hospital System required unprecedented work by Dr. Brian Garibaldi, Dr. Scott Zeger, and a team of dedicated students, fellows, and junior faculty. With EHRs, drop-down menus are all different, giving way to differing definitions and categories making cross hospital comparisons impossible. The amount of work required to match up Johns Hopkins’s own systems can make the concept of unifying sex and gender data across all healthcare seem impossible.

The world has made some improvements to sex and gender metadata reporting due to the pressures imposed by the COVID-19 pandemic.4 Global Health 50/50 is a nonprofit organization committed to better understanding differences between males and females in very broad terms. They have their own COVID-19 tracker (shown above from August 10th), but the sex disaggregated data is primarily binary. They have been able to document important information, such as how hospitalization and death rates were roughly 3:1 males to females, which has reduced to about 2:1 as vaccines rolled out.

This non-profit filled a gap where the CDC and state governments were inconsistent and/or lacking on their sex metadata collection and reporting. As we stated earlier, demographic categories with COVID-19 data are unnecessarily convoluted. As shown in the interactive visual below, sex categories are inconsistent between states, and only a few states allow for transgender or non-binary identification in their data collection.

This interactive chart allows you to select a category of COVID-19 data, e.g. vaccinations, and view the different categories of sex and gender data recorded in the United States and how many states utilize each label. In an ideal scenario, there would be multiple categories, allowing for categorizations outside of binary male/female, and all bars would be the same height, showing that the diverse sex and gender labels are available and utilized for all COVID-19 data streams across all states.

Improving Sex and Gender Data for the Future

There is clearly room to improve, and there are multiple solutions we should begin pursuing from all fronts and all disciplines.

Sex and gender are key to public health, and lay at the intersection of race, age, and other key demographics. Mending our systems of sex and gender data collection should be the low-hanging fruit we can aim for first before tackling the rest of the United States’s complex issues with demographic data.

The title, meta, and map images were modified from Global Health 50/50 under creative commons license BY-NC 4.0.

Sabra Klein, PhD, MS, MA, is a professor in the departments of Molecular Microbiology & Immunology, Biochemistry, and Molecular Biology. Her research focuses on evaluating the effects of hormones on immune responses to viral infections, which her laboratory uses to understand differences between males and females, the effects of pregnancy, and the effects of aging on the outcome of viral infections and vaccinations.

Beth Blauer is the Associate Vice Provost for Public Sector Innovation and Executive Director of the Centers for Civic Impact at Johns Hopkins. Blauer and her team transform raw COVID-19 data into clear and compelling visualizations that help policymakers and the public understand the pandemic and make evidence-based decisions about health and safety.